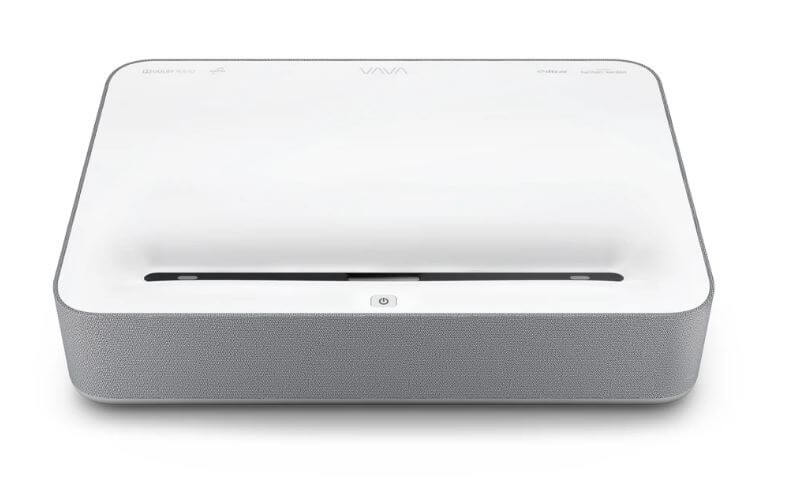 The VAVA 4K UHD Laser Home Theater Projector is a shining example of what laser-based projectors can do. It combines an incredible picture and broad connectivity options with a user-friendly set-up and interface. Anyone who’s been contemplating switching from a TV to a projector just might decide to pull the trigger once they see the VAVA 4K Projector in action.

We should point out that the VAVA 4K Projector has a lot of strengths, but it isn’t perfect. Gamers especially will want to take a close look at this projector’s specs before they buy. (>>> Check its Pricing on ProjectorScreen.com) Let’s go through them in more depth so you can see why.

The three-segment color wheel and 6,000-lumen lamp give the VAVA 4K UHD Laser Projector a vibrant, bold picture. Its 4K resolution is the sharpest you’ll find of any projector on the market. It also has a high contrast ratio so that detail stays sharp even when the image on the screen gets dark. It’s also included among the best laser projectors.

Just listing the stats for the VAVA 4K Laser Projector doesn’t do the image quality its full justice. The depth of the color from this projector is stunning. The image looks truly life-like, even if the room around it is bright. While most users do need to fiddle with the color settings a bit before reaching their ideal image, making these adjustments is simple, and the result is well worth it.

Laser projectors like the VAVA 4K can achieve low throw ratios than lamp-based projectors simply can’t match. Here, the ratio is around .233:1. In terms of distance, that gives you a 100” screen from just over 7” away.

The first advantage of that ultra-short-throw is that you don’t need professional installation for the VAVA 4K. Most people can just set it on the entertainment center, right where the TV used to be. It also makes the VAVA 4K Projector more versatile, letting you use it in rooms of any size or layout.

The VAVA 4K Laser Projector is ideal for people with complicated home theater set-ups. It has a total of 9 ports for plugging in content sources and accessories. Included in this are 3 HDMI ports, as well as USB and video-in hook-ups.

While you won’t necessarily need external speakers, they’re easy to connect either through the wired audio out or Bluetooth. You can also stream content from your phone via Bluetooth, or use the built-in Wi-Fi to connect to devices.

Navigating the Smart Android 7.1 interface is very simple and easy. Even projector novices will be able to find and change the projector’s settings with ease. Our only complaint against the interface is that it might be a bit too simplistic. It’s lacking some popular apps and features, so you won’t want to ditch your streaming stick quite yet.

One surprising pro of the VAVA 4K projector is its built-in sound. It comes with a 60-watt Harman Kardon soundbar that offers Dolby Audio compatibility. True audiophiles will still want to use external speakers—the bass is still a bit weak, and it won’t give you surround sound. Having said that, it has better native sound than most televisions, and it’s exceptional compared to most other projectors.

The flip side of this is the VAVA 4K Laser Projector also has a significant lack. The input lag on this projector is far too high for serious gaming, measuring over 100ms even at its fastest settings. For context, most serious gamers look for an input lag below 40ms, and anything above 60ms is considered poor from a gamer perspective. If you are looking for 4k projector more suitable for gaming check this guide.

For home theater use, the VAVA 4K Laser Projector is a great buy. (>>> Check on ProjectorScreen.com) Its state of the art design combines convenience and flexibility into a user-friendly package that anyone can set up and install. It’s an excellent big-screen upgrade for a TV-based set-up, which won’t require significant modifications in terms of the space or the connectivity.

The only caveat to this recommendation goes out to gamers. While the VAVA 4K Projector connects easily to modern consoles, the delay will be noticeable in any fast-paced game and is especially frustrating for online multi-player games. In our opinion, this is the one weakness of an otherwise exceptional projector.