Laser projectors have a sharper image and wider range of available colors than lamp-based models. If you’re looking for the best picture quality in your home theater, a laser projector is a good way to go. Since this is a newer technology, it can be hard to figure out which is the best, especially if you’re comparing high-quality equipment like the Vava 4K vs Optoma P1 projector.

In our opinion, the Optoma P1 Home Theater Projector is the stronger option between the two. >>> Check price on Amazon These models have an equally sharp picture and impressively short throw ratio but differ on some other key specs. Before going into the full reviews, let’s take a look at the most important features and how these models compare in each.

Vava 4K vs Optoma CinemaX P1 Side by Side Comparison:

The general rule of thumb is that a projector brightness of around 2,500-3,500 lumens is ideal for a home theater. Laser projectors typically have a short-throw ratio, which can make a lamp look brighter since the light has less distance to travel before reaching your screen. (Our guide of best laser projectors can be found here)

Brighter isn’t always better. In large, well-lit spaces, you may want a brighter lamp, even as high as the 6,000 lumens produced by the Vava 4K. In a smaller, darker room, though, a lamp that bright can cause eye strain and be less appealing to look at.

Traditionally, the speakers on projectors aren’t good enough to give you an immersive viewing experience. Both the Vava 4K and the Optoma P1 buck this trend by building soundbars into the projector. While neither soundbar will give you true surround sound, the Harman Kardon soundbar on the Vava 4K is louder and gives better audio quality—enough you may not need additional speakers.

The delay between your input and what you see on the screen is often longer with a projector than a flat-screen TV. While this isn’t likely to affect your viewing experience for movies and TV, it’s a very important stat for gamers. An input lag of 40ms or lower is ideal for gaming. Anything above 60ms will be frustrating for players of fighting games, first-person shooters, racing games, and anything else that demands quick reactions. (Click here for best 4k gaming projectors guide). 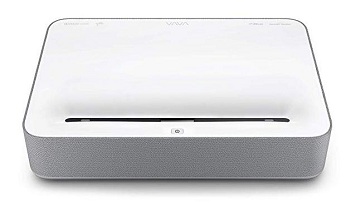 The Vava 4K Laser Home Theater Projector is a versatile projector. Thanks to the ultra-short throw ratio and the high lamp brightness, it will work in any room, big or small. This combination of features also makes it very easy to set up. We also found the interface intuitive and easy to navigate. You can even adjust the image while you’re watching a movie, something some projectors won’t allow.

Sound is another strength of the Vava 4K Laser Projector. The 60-watt Harman Kardon soundbar built into this unit is loud enough to be used without external speakers in smaller rooms. You can also easily attach additional speakers through Bluetooth or a wired connection.

Our complaints against the Vava 4K Laser Projector are minor. The brightness is high—maybe even too high, for users who want to replicate the darkness of a movie theater. You’ll want to use this projector in a room with some ambient light to avoid eye strain. The only other significant lack is with the input lag, which is high at around 100ms. This won’t affect movie watching but is far too high for gaming.
>>> Full VAVA 4K projector review. 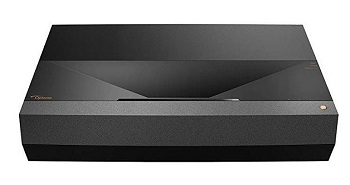 On first glance, the Optoma CinemaX P1 Laser Projector is very similar to the Vava above. The Optoma also gives you the flexibility of a short-throw ratio, an integrated soundbar, and an incredible picture quality. (>>> For full review of Optoma P1 click here)

The first difference you’ll notice with the Optoma CinemaX P1 Home Theater Projector is the lamp brightness. It’s about half that of the Vava, at 3,000 lumens. This is more what you’d expect from a home theater projector, and better for smaller or darker spaces.

The Optoma CinemaX P1 Projector is also smarter, with a better interface. It’s easier to navigate, first of all. It’s also easier to integrate into a smart home system. Along with built-in support for voice control services like Alexa and Google Assistant, it also has support for IFTTT. This lets you customize your display and even program new features.

Both the Optoma CinemaX P1 and the Vava 4K Projector get high marks overall for being user-friendly and easy to set up. The smart features built into the Optoma CinemaX P1’s software give it a slight edge from a usability standpoint. >>> Check current price on Amazon Along with easy navigation, the auto-focus makes it easier to set up, even for users without a lot of projector experience. Both of these models are included in our best 4k projectors list here.

If you need a short throw ratio but still want a sharp, clear, and detailed picture, a laser projector is your answer. They’re comparable in price to lamp-based 4K projectors and generally exceed them in nearly every category, from lamp life to color accuracy. Both the Optoma CinemaX P1 and the Vava 4K Projector are designed for a home theater. Whichever one you buy, you’ll get an easy to use projector with a beautiful picture, for years of high-definition entertainment.