The HU915QE is LG’s 2022 addition to their CineBeam line of home theater projectors, and while past models in the line were impressive, it promises to be a significant upgrade. It brings users all-in-one capability, with robust streaming support and high-quality built-in sound, along with a picture quality to please even the pickiest of home theater enthusiasts.

While there’s no question the HU915QE is a high-quality projector, it also carries a pretty hefty price tag. This leaves most buyers with one pressing question: is it worth the cost? We’re outlining its full features in this LG HU915QE review to help you answer that question (>>> Find on ProjectorScreen).

With its bright lamp and short throw distance, the LG HU915QE can work beautifully in just about any space. It produces an image up to 120 inches with less than 2 feet between the lens and screen, so small spaces aren’t a concern. The powerful laser phosphor light source puts out an impressive 3,700 lumens, backed by an automatic brightness optimizer and adaptive contrast that produces an image optimized for your viewing area.

This short throw distance also makes the LG HU915QE very easy to install. Just set it up on an entertainment center or table and turn it on, then shift the projector side to side until the picture aligns. It can be positioned at any angle relative to the screen thanks to the extensive anti-warp feature, with 4-, 9-, or 15-point correction to ensure a squared image in any space.

The 3-channel laser and DLP display of the LG CineBeam HU915QE combine to give users an incredible picture quality, with a smoother, more natural image than you’ll get from other projectors. Its native 4K resolution gives the picture remarkably life-like details, with a high dynamic contrast ratio for sharp images and deep black levels.

The color of the HU915QE is equally impressive. It produces the full DCI-P3 color gamut, meeting the standard for professional theaters, while support for HGiG, HLG, and HDR10 ensures the accuracy of those hues.

Just about the only significant limitation of the LG HU915QE from a home theater perspective is that it doesn’t support 3D content, which is a bit disappointing considering the price point.

Most users won’t need an external sound source when they use the LG HU915QE. Its 40-watt 2.2-channel sound system has a sound quality and volume on par with most standalone soundbars, and does justice to sound effects and music, with exceptional clarity in the mid-range for dialogue.

There is also an optical audio out if you do want to attach external speakers, and you can also connect speakers wirelessly via Bluetooth. Like we said, though, you’ll likely only need to do so if you want full surround sound in your home theater space.

The CineBeam HU915QE uses LG’s ThinQ AI interface. This gives it built-in voice recognition through the included Magic Remote without the need for third-party services. If also supports Amazon Alexa voice control out of the box, if you prefer that system.

This integrated interface also gives the HU915QE direct streaming capability. This includes support for popular streaming services like Prime Video, Disney+, and Netflix, and it has access to an app store and web browser for downloading other apps.

It’s also easy to stream content to the LG HU915QE wirelessly from other devices. It supports AirPlay 2 for Apple products, giving it screen sharing and mirroring capability.

The LG HU915QE has the features most people look for in a home theater projector, including ultra HD resolution, an ultra-short throw distance, a bright lamp, and built-in streaming capabilities. That said, it’s not perfect, and the lack of 3D support could be a deal-breaker for some.

Ultimately, whether the HU915QE is worth the cost comes down to your needs from your projector (>>> Check on Bhphotovideo). It has the capability to turn any room into a high-end home theater, and the overall image quality is superior to what you’ll get from lower-cost projectors. We hope this review has helped you decide if it’s a good fit for your home! 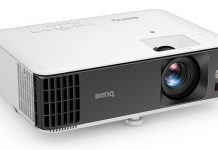