A 4K projector like the BenQ TK850i is the ideal centerpiece of a modern home theater. Along with cinema-level picture quality, this projector has a user-friendly design and a robust connectivity, making it easy to integrate into a range of home entertainment set-ups.

While the performance of this BenQ projector is impressive overall, it does have its limitations, and it won’t be the best pick for every situation. We’ll go through its main features in this BenQ TK850i review so you can decide if it’s the right projector for your home theater. (>>> Check current price on Amazon)

The BenQ TK850i is a standard throw projector. You’ll need about 9 feet of distance to produce a 100” image. That’s not an issue for most living rooms and home theaters but is something to note if you live in a studio apartment, dorm room, or other smaller space.

As long as you have enough room for it, the installation process of the BenQ TK850i is quick and user-friendly. For fine-tuning the image, you can use features like the 1.3x zoom, 10% vertical lens shift, and vertical keystone correction.

The BenQ TK850i is designed to be plug-and-play right out of the box. You don’t need to do any calibration or other internal set-up before you start to watch. The built-in Android TV interface is intuitive to navigate, as well, both when you’re downloading streaming apps and searching for content.

The 4K Ultra HD resolution of the BenQ TK850i gives you 8.3 million on-screen pixels, giving you an exceptionally sharp and detailed picture, even beyond what you’d experience with full HD. This is enhanced by the Dynamic Iris on the 10-element lens array, which adjusts the brightness to suit the environment and content, optimizing the contrast of the image. The result is a well-balanced image with rich black levels and excellent picture depth, in any ambient light level.

We’re also impressed by the color reproduction of the BenQ TK850i. It supports HLG and HDR10, ensuring the colors will be accurate and display the way they were intended. This produces a wide color gamut, as well, supporting roughly 98% of the Rec. 709 spectrum.

The only potential issue with the BenQ TK850i from a picture perspective is that it does use a 4-segment color wheel. Because of this, it may cause the rainbow effect for viewers sensitive to it. This isn’t a widely-reported issue and won’t be a problem for most users, but it’s something to be aware of.

The wired connection options on the BenQ TK850i cover all the bases you’d expect for a modern projector, with dual HDMI ports, a USB port, and options for connecting external speakers. More impressive is its wireless connectivity. It supports both AirPlay and Chromecast, allowing you to wirelessly mirror content from your phone or tablet to the projector.

Many people won’t even need external content sources for the BenQ TK850i thanks to its Android TV interface. You can download more than 5,000 apps through the Google Play Store, letting you stream movies, play games, or even watch live TV shows and sporting events directly through the projector. The only notable omission is Netflix, which isn’t available for download on the BenQ TK850i.

The versatility and usability of the BenQ TK850i make it a great choice for most homes. While it does need a decent amount of space for a big picture, the lamp is bright enough to compete with ambient light sources without the picture suffering, and it’s easy to install overall. (>>> Check current price on Bhphotovideo)

Most people in the market for a 4K projector are predominantly concerned with picture quality, and on that point the BenQ TK850i definitely delivers. The sharp resolution, high contrast, and vibrant colors combine for an immersive picture all at screen sizes. We hope this review has helped you decide if it belongs in your home! 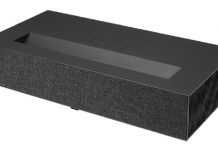