To truly replicate the movie theater experience at home, 3D capability is a must-have feature for your projector. Once an option only found on the most expensive high-end projectors, today you’ll find 3D ready models at every price point. Of course, all that variety can also make it hard to decide which one is the best 3D projector for you.

Based only on its 3D performance, our top pick is the BenQ TH685P (>>> Check the current price on Amazon). It supports the most 3D transmission formats, with a low lag and high frame refresh rate to keep the on-screen action smooth for all types of content.

That doesn’t necessarily mean the TK850i is the best choice for everyone. Let’s take a look at the top models with 3D support and compare their key features so you can decide which one is right for you.

There are 4 common transmission formats for 3D content: Frame Sequential, Frame Packing, Checkerboard, and Side-by-Side. The main difference between them is how the frames are positioned on the screen, which dictates the kind of glasses you’ll need to use to see the 3D effect.

Most 3D home theater projectors are 3D Ready. These use a Frame Sequential transmission, allowing them to project content from 3D systems like Nvidia 3D Vision. Unfortunately, they can’t play 3D content directly from many Blu-ray players, cable boxes, and other content sources.

Full 3D projectors, on the other hand, support multiple 3D transmission formats. This gives them more versatility for accessing 3D TV shows and movies without buying any extra accessories. They’ll also work with a wider variety of 3D glasses, including the ones you get free at the movie theater.

For the widest 3D support, the BenQ TH685P is the winner, supporting all 4 common 3D formats.

If you plan to use the projector for gaming, a low input lag is a crucial stat. Anything under about 30ms is considered fast enough for gaming, with no noticeable delay between your input and the on-screen response.

A high frame rate is also important, preventing motion blur and keeping the action smooth. This is a good thing for 3D content, too, producing a sharper and clearer picture. Ideally, you want a frame rate of 240Hz at Full HD, though anything above 60Hz will be fast enough for most.

Most people don’t have a dedicated home theater space and need a projector that can work with their home environment. If your space has a lot of ambient light, you’ll need a brighter lamp. Anything over 3,000 lumens should do fine in most indoor environments.

The throw distance of the projector is a factor here, as well. This specification tells you the relationship between the screen size and the distance between the screen and lamp. Most standard throw projectors will need around 8-10 feet of distance to produce a 100” image, limiting their use in smaller spaces.

When it comes to installation flexibility, the Optoma CinemaX P2 is the stand-out winner. It has an ultra-short throw ratio, producing a 100” image with just 2 feet of distance. Since the light doesn’t have to travel as far, it’s also less prone to washout from ambient light.

The Optoma CinemaX P2 is the best 3D projector for a smart home entertainment system. Its built-in Android interface lets you download streaming apps right on the projector, no need for a streaming stick. Along with that, it’s compatible with multiple voice control systems and can be used with IFTTT. That allows you to link the projector to other devices like smart lights and doorbells, as well as create customized routines and commands.

Installing the Optoma P2 is easy, too. It has an ultra-short throw distance, producing a 120” image with just over 2 feet between the lens and screen. For most users, that means no need for a ceiling mount or other hardware. Along with that, the Optoma SmartFIT app automatically corrects the image geometry, eliminating warp and squaring the picture to the screen. It even has a built-in 40-watt soundbar with Dolby Digital support, with high enough quality and output you don’t necessarily need to use external speakers.

Along with all these convenient features, the Optoma CinemaX P2 is an excellent choice if you want the best picture quality. Its laser light source is backed by HDR10 and PureMotion technology, with a 6-segment color wheel whose color gamut exceeds the Rec. 709 spectrum. With true 4K resolution and a high contrast ratio, you’ll get a sharp, detailed, and realistic picture from the CinemaX P2. Read our full review of the Optoma P2.

Those looking for a projector that can both play 3D movies and be used for gaming, the Optoma UHD50X is an excellent choice. It’s one of the most responsive mid-range projectors on the market, with a fast 240Hz frame rate and an input lag as low as 16ms in Enhanced Gaming Mode. The input lag is slightly higher in 4K but it’s still under 30ms, making it suitable even for serious gamers.
With its cinema-quality picture, the Optoma UHD50X offers the same exceptional performance to home theater users as it does to gamers. The DLP display uses an 8-segment color wheel with 10-bit color processing. Along with rich colors, the high dynamic contrast ratio produces deep blacks and keeps the image sharp, supporting the clarity and realism of the 4K resolution.

The Optoma UHD50X is relatively versatile. Since it has a bright lamp, you won’t need to worry too much about light control in your viewing area. It does have a longer throw ratio which could limit its use in smaller rooms. That said, it has a wide vertical keystone correction and vertical lens shift along with a 1.3x zoom, so as long as you have the space it gives you good installation flexibility.

Here’s a streaming projector for buyers on a budget. The Epson Home Cinema 2250 is one of the best 3D projectors in the under-$1,000 price range, especially for those who want to stream content right on their projector. It uses an Android TV system with Google Assistant voice control. You can watch shows and movies through Hulu, HBO, and more, and search for content on all of them with your voice through the included remote.

From a picture quality standpoint, the Epson 2250 is impressive for the price, if not as stellar as the projectors above. One advantage it has is the use of a 3LCD chip system for the color production. That’s especially good news for those sensitive to the rainbow effect, and gives viewers more consistent overall color saturation and brightness. On the other hand, the lamp brightness, resolution, and contrast are lower. You’ll still get full HD resolution, and the dynamic iris makes the most of the 2,700 lumens put out by the lamp.

The Epson Home Cinema 2250 is an ideal choice for living rooms and home theater spaces. It uses a standard throw ratio and may need some light control, especially if your space has a lot of windows, but the set-up is fairly easy with a good range of adjustment features. We also appreciate the portability of the 2250, which weighs less than 10 pounds and has a compact, rugged design. That makes it a good choice for indoor/outdoor use around the house, especially since it can produce images up to 300”. For a more detailed Epson 2250 review click here.

The BenQ TH685P is another great option for gamers as well as 3D movie buffs. Activating Game Mode drops the input lag to single digits with a 120Hz frame refresh rate. It also adjusts the image to add more detail to dark screen areas, helpful for spotting enemies in FPSs or loot in RPGs.

Another advantage of the BenQ TH685P is its price. Not only is it the best 3D projector under $1,000, but it also outperforms more expensive projectors in its 3D format compatibility. It supports all four major 3D formats from any content source, including gaming consoles or Blu-ray players.

The main sacrifice you’ll make for this value is the resolution, which maxes out at Full HD (1080p). On the plus side, it still has the robust image technology you’d expect from a BenQ projector, with a color gamut covering 95% of the Rec.709 spectrum. It’s also relatively flexible to install, with a shorter throw distance than most lamp-based projectors and a bright lamp so you can use it with the lights on. For our more in-depth BenQ TH685P review, click here.

Last but not least, the Optoma UHD30 has similar performance to the Optoma UHD50x above. It’s just as responsive, first of all, with a low 16ms input lag and a fast 240Hz processing speed at 1080p (120Hz at 4K). Other features these projectors have in common include the true 4K resolution, a bright 3,400 lumen lamp, and support for HDR10 and HLG. In short, the picture is sharp and immersive.

From a picture standpoint, the color accuracy is the most impressive aspect of the Optoma UHD30’s performance. Its 8-segment color wheel goes beyond the Rec. 709 spectrum to cover the DCI-P3 color space. Hues are further enhanced through HDR tone mapping. While the use of a color wheel may cause issues for those sensitive to rainbowing, most viewers will find the realism exceeds their expectations.

Our only complaint against the Optoma UHD30 is that it’s not as easy to install. Since it uses a standard throw ratio, most people will want to mount it on the ceiling or wall. You’ll need to be precise in your alignment when you do so since the adjustment options are limited. There’s a wide vertical keystone correction but no lens shift and a limited zoom. Once you have it installed, though, it’s a versatile, powerful projector suitable for both gaming and movie watching. Click here for our full Optoma UHD30 review.

As you can see, each of these projectors has its advantages. While the BenQ TH685P has the widest 3D compatibility, all of them will play 3D content in full HD (>>> Find the price on BHPhotoVideo.com). Consider your viewing area and how you’ll use the projector before making your decision. Whether you’re a gamer, a smart home owner, or a movie buff (or a mix of all three), one of the options above is sure to meet your needs. 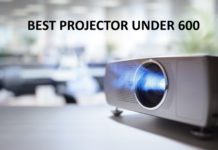 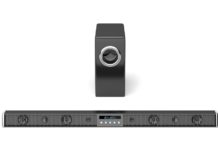 The Best Soundbar for Projector Audio for 2022