Any projector will bring big-screen entertainment to your home, but not all of them will work in a wireless setup. Features like screen mirroring, integrated streaming interfaces, and voice control support simplify the installation and navigation of the projector, and make these models a better fit for modern homes and lifestyles.

Looking at overall performance, the LG HU715Q is the best wireless projector, with a convenient ultra-short throw distance as well as the highest image quality and resolution (>>> Check on Amazon). This doesn’t mean it’ll be the best option for every home, though. Let’s look at the most important factors buyers should consider, and which projector is the winner in each category.

Light is the enemy of a projected image. The more ambient light there is in your viewing area, the brighter the projector’s lamp needs to be to compensate. In a completely dark space, you can get away with a brightness of around 1,000 lumens. For lights-on viewing, you’ll want something at least in the 2,000-2,500 lumen range, and bright spaces call for a lumen rating of 3,000 or higher.

The Epson Pro EX9240 is the brightest projector on the list, producing a consistent 4,000 ANSI lumens. That will give you a vibrant, defined image even in bright environments. The Optoma UHD55 is a close second, at 3,600 lumens, which will be plenty bright enough for the majority of indoor viewing areas.

Unlike TV screens, projectors offer a range of image sizes. The further the lens is from the screen or wall, the larger the image will be. How much space you’ll need to produce a given image size is known as the throw distance, and varies depending on the light source technology utilized in the projector.

The XGIMI Horizon and XGIMI Horizon Pro both have a reasonably short throw distance, needing around 7-9 feet for a 100” screen. For the absolute shortest throw on the list, the LG HU715Q is your answer. It produces a 100” image with less than 2 feet between the lens and screen, and needs as little as 15 inches of distance for a clear 80-inch image.

All of these projectors have a native resolution of at least Full HD (1080p). The LG HU715Q, Optoma UHD55, and XGIMI Horizon Pro go a step further with Ultra HD (4K) resolution. Of the three, the LG HU715Q is the only one to offer super resolution upscaling, going beyond the standard 4K definition, paired with exceptional color and contrast that give it the best overall picture quality on the list.

Input lag is mostly talked about in the context of gaming. This measures how much delay there is between the user’s input and what shows up on the screen. Ideally, gamers want an input lag of 30ms or lower, though anything under 60ms can be considered acceptable for casual players.

A high input lag is a concern for home theater users, too. It can lead to sync issues between the video and audio signals, and can disrupt 3D formats that use frame interpolation to produce the effect. The lag threshold to prevent these types of issues is higher than for gamers, however, and you won’t experience them from any projector with an input lag of 100ms or lower.

There are three projectors on this list with a low enough lag for serious gamers: the Epson Pro EX9240, Optoma UHD55, and ViewSonic X1. The Optoma UHD55 is the best of the three for gamers, with a single-digit input lag in full HD as well as a fast 240Hz frame refresh rate.

The XGIMI Horizon Pro is one of the best portable 3D projectors you’ll find on the market. Its unique, compact shape fits easily in a backpack or suitcase and weighs just over 6 pounds, perfect for on the go entertainment. You can also use it without any extra accessories since it has powerful built-in speakers and an integrated Android streaming interface.

Along with portability, the Horizon Pro gets high marks for ease of use. Part of this is its automatic image adjustment. The optical sensor automatically adjusts the focus, screen alignment, and image geometry based on the projector’s placement, and also optimizes the image based on the room’s light level. That means anyone can get a fantastic picture with the Horizon Pro, no matter your level of A/V experience.

While the XGIMI Horizon Pro isn’t a short-throw projector, it doesn’t need too much space to operate, producing a 100” image with just under 9 feet of distance. The LED light source isn’t exceptionally bright—you can leave a couple of lights on while you watch but it will be prone to washout in brighter spaces, especially since its image contrast is relatively low to start with. These limitations aside, it’s a powerful and versatile projector, suitable for gaming, 3D movies, and all your other entertainment needs.

The LG HU715Q uses a DLP display with XPR technology to produce a true Ultra HD resolution. It goes a step beyond 4K thanks to its Super Resolution upscaling, further enhancing the detail for maximum realism. It’s also compatible with HLG and HDR10 to ensure accurate, vibrant colors, so you can count on all your content to look its best on this projector.

The LG HU715Q has three brightness modes (Bright Room, Medium, and Dark Room) as well as User iris modes. This makes it easy to find the ideal brightness level for your space, though it’s still not the best option for particularly bright spaces. Its 2,500 lumens will be enough for most indoor environments, especially considering its ultra-short throw, but just can’t compete with bright light sources like daytime sunlight.

Brightness aside, the LG HU715Q is a very versatile projector. It can produce a massive 120-inch image with less than 2 feet of distance and has a detailed Edge Adjustment keystone correction to eliminate warp and skew. It also has the smart features you need in modern home theater setups, including wireless screen mirroring from Android or iOS devices and an integrated ThinQ streaming interface with voice recognition.

If you plan to both watch movies and play games using your projector, the Optoma UHD55 is an excellent choice. Its picture quality is top notch, with an XPR 4K resolution, a high dynamic contrast, and a wide color gamut. The result is an accurate, realistic image across content sources or styles.

That high contrast is helpful for gamers, too, but even more crucial is the Optoma UHD55’s low input lag. Its measured input lag is as low as 4ms for full HD games, with a high 240Hz refresh rate to ensure smooth on-screen action. It’s nearly as responsive for 4K games, with a 60Hz frame rate and 16.9ms input lag on par with the top gaming projectors on the market.

Now, the Optoma UHD55 uses a traditional lamp and has a standard throw distance, needing around 10 feet to fill a 100-inch screen. It’s relatively flexible within that space, however, with a 1.3x zoom and vertical lens shift for fine-tuning. The Wall Color Adjustment feature is especially helpful in screenless installations, ensuring accurate colors even on a non-white surface. Its connectivity is equally flexible, with a built-in media player for watching content from USB drives and an included wireless adapter to support streaming apps and voice control. Learn more about the Optoma UHD55.

Here’s another option from Epson that’s a great choice for both home theater use and business or classroom presentations. The Epson Pro EX9240 has a bright 4,000-lumen lamp, built-in 16-watt speakers, and extensive wired and wireless connectivity, giving it flexibility for nearly every set-up and space.

The EX9240 is one of the few models on this list to use a traditional lamp-based light source, and this does come with some limitations. It doesn’t last as long, for one thing, with a lifespan that’s less than half that of a laser light source. This also gives it a relatively long throw distance, as much as 15 feet for a 100” screen.

On the plus side, the EX9240 has a very user-friendly installation. The integrated picture skew sensor gives it automatic keystone correction, for a square image any time without any hassle. Its low input lag makes it ideal for gamers of all levels, especially since it has the inputs for both PC and console gaming.

The ViewSonic X1 uses an LED light source, giving it an impressive lifespan of up to 30,000 hours. This also improves its color performance, with a color gamut that exceeds the Rec.709 spectrum and a high dynamic contrast to match. The downside of this LED light source is it’s not as powerful as lamps or lasers. The X1 puts out 3,100 LED lumens, which is equivalent to about 1,300 ANSI lumens. That’s enough for a dark home theater space but will struggle in well-lit spaces.

From a wireless connectivity standpoint, the ViewSonic X1 is one of the top options on the list. It has embedded Wi-Fi and supports screen mirroring from Android and iOS devices. For easier control, you can pair it with the vCastSender app to use your phone as a remote. Along with this, Bluetooth support lets you wirelessly connect speakers, though you may not need to. The dual Harman Kardon speakers built-in have a strong output with a balanced, clear sound.

The ViewSonic X1 is also a great choice for those who want a wireless projector at a great value. The main sacrifice you’ll make for this lower price is image resolution. While the X1 can play 4K content, it will be downscaled to 1080p.

Last but not least, the XGIMI Horizon is an affordable alternative to the Horizon Pro above, offering similar strengths for a lower price. This includes automatic focus and skew correction for a smooth, fast set-up and a portable, lightweight design. It also has all-in-one capability thanks to the built-in Harman Kardon speakers and Android 10 streaming interface.

The main thing you sacrifice with the Horizon compared to the Horizon Pro is picture quality. It accepts 4K content but plays it at 1080p, and also has a relatively low image contrast. As a result, the image is noticeably less detailed than other projectors on this list.

On the plus side, the XGIMI Horizon offers great versatility for the price. While it does best in lower light levels, it doesn’t require a completely dark space. Its throw distance is also reasonable, needing around 9 feet for a 100” image. Its input lag is low enough for casual gamers, too.

So What’s the Best Wireless Projector?

As is often the case, there’s no one wireless projector that will be the best choice for every home. The LG HU715Q offers the best overall performance, with an excellent image quality and ultra-short throw distance that gives it good space versatility (>>> Find on Projectorscreen). For brighter spaces, though, the Epson Pro EX9240 could be your best choice, while the portability of the XGIMI Horizon models lets you take your entertainment with you. Gamers, on the other hand, will want to check out the Optoma UHD55. We hope this comparison has helped you pick the best wireless projector for your home theater! 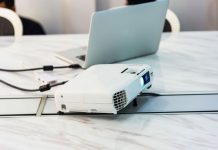